The Wissahickon Creek Valley, locally known as Valley Green or simply “the Crick”, has experienced a vast increase in local and tourist traffic over the years. The biking and hiking trails are kept clean and challenging to novices and experienced adventurers alike. The historic park features pristine views, ample wildlife, and a distinct lack of Flamin’ Hot Cheeto’s bags along its Northwestern Philadelphia trail. At least, it did.

As reported by the Philadelphia Inquirer, the Crick has seen an increase in visitors of close to a million, or a 1/3rd increase since the previous year. Of course, an increase of this magnitude to any location would result in a strain on resources and organization efforts, but something about this increase has been different. 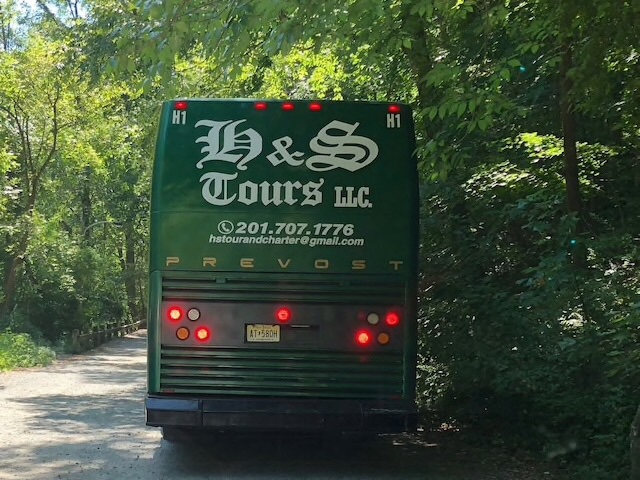 The shockingly unreported–or purposefully avoided–elephant in the room is that massive tour buses and organized groups have been routing large amounts of poor and urban communities to the park. Philadelphia Inquirer has decided to blame the increase in hazardous waste on “climate change” and some strange 1950’s Archie Comics idea of punk teens leaving a mess by Devil’s Pool (a historic makeout point and teenage death trap swimming hole in the park).

This fact has been largely brushed off by the local Roxborough and Wissahickon community, including the so-called Friends of Wissahickon–the volunteer organization tasked with cleaning up the soiled diapers, old broken charcoal grills, and Takis bags that have mysteriously built up in the Valley Green area, replenishing just about every week during the Summer.

It’s worth mentioning that Wissahickon Creek Valley has several grilling and picnicking areas designated that have been enjoyed by families and other groups for decades with little-to-no evidence they’d ever been there at all. However, the new phenomenon of increased traffic and waste has been collecting primarily in park areas where this behavior is prohibited. 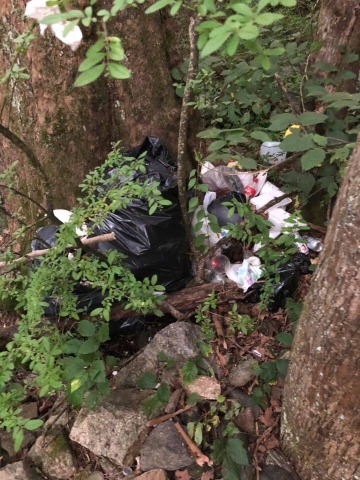 Some locals have even suggested that the issue of North Jersey bus companies bringing in massive groups from Brooklyn and other areas, leaving a tidal wave of trash in their wake, is a systemic problem, and the only way to combat the issue is to ban plastic packaging and other non-biodegradable materials. Of course this is just an absurd self-punishment and hand-wringing white guilt that makes up a majority of the transplant progressive influx in the blue collar Northwest Philadelphia area; a natural byproduct of those pretending to care about property destruction by implementing strategic and widespread self-flagellation.

The entry points into the park are scarce, and meant to be kept clear for visitors and emergency vehicles. It became clear when I personally visited the park through the narrow entry point on Wises Mill Road, that the police presence–which I had never before experienced in the park–was overwhelmed.

Vehicles parked up and down the narrow pathway were all receiving parking tickets by one or two officers, blocking off the road even further. As I continued down the path to the parking lot beside the famous Valley Green Inn restaurant, even more police were stationed around a large group of urban cookout attendees. Based on what I could tell, the cops served primarily as babysitters, unable to stop the attendees from having their fun, spreading trash, hanging plastic bags from trees and building charcoal fires precariously on the creek side.

According to the Inquirer, police have been largely unable to write violations for any wrongdoing aside from parking citations (over 250 in the beginning of Summer alone). They claim they prefer to “educate,” whatever that means. Police also seem to be unaware of the rules and regulations of the park regarding swimming, camping and grilling in the area; or, more likely, they are all but disabled by their superiors and the District Attorney’s office from performing their duties as required.

With the influx of certain groups to the area, crime has gone up as well. Vehicle theft, equipment theft, property destruction and damage to the park have all increased by metrics never before seen in the community. And what’s even more concerning is that no one seems to care in any meaningful sense. Coordinators for the Friends of Wissahickon volunteer group admit that the scenes are common, but have all but washed their hands of any responsibility, content to simply bury their heads in the sand and pathetically shadow the perpetrators cleaning up their mess week after week.

Other members of the park volunteers have said they hope to “change the culture” of how certain individuals use the park. But the only response that seems to have been attempted has been tacking laminated signs to trees, hopelessly begging visitors to use the trash cans–an act reminiscent of officials in India pleading with residents to stop pooping in the streets.

All the while, the City of Philadelphia has been relying heavily on volunteers in middle class areas to police themselves and take impossible hours out of their schedules to clean and maintain public schools and parks where the government can’t be bothered. City government has no problem increasing your taxes to pay for their dwindling efforts, but then wind up spending it all on diversity awareness campaigns forcing those who pay a majority of the taxes to fend for themselves. 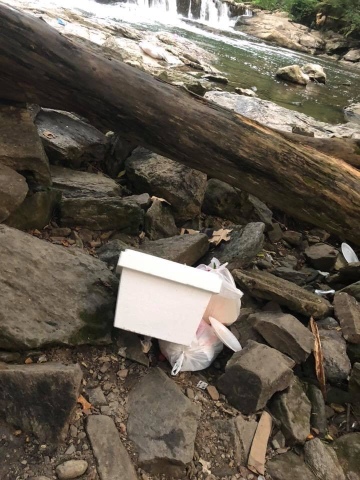 When the inevitable occurs and an uncontrollable fire breaks out in the Wissahickon Valley, the media and locals will surely continue to blame the disaster on climate change or some other such nonsense, rather than the evidentiary cause of all of these increasing widespread infernos: mass migration of individuals who have destroyed their own communities to areas they are even less likely to treat with dignity and respect, illegal cookouts, incompetent fire building, and wayward junkies.

In the end, if locals, law enforcement, and volunteers should ever hope to accomplish the Sisyphean task of completely reversing the baked-in cultures of third world communities that they seem so desperate to welcome into their neighborhoods, the very least they could do would be to present some intellectual honesty about the degradation that their stalwart patronizing ideology brings to the table.