It’s been almost 23 years since we last cheered on the District Five, Junior Goodwill Team USA, Eden Hall Mighty Ducks and the country is worse off for it.

In 1992, The Mighty Ducks kicked off a string of Disney children’s sports films–which were all basically rip-offs of The Bad News Bears–which almost never happened. When NHL great Wayne Gretzky got traded to Los Angeles, he brought a tidal wave of hockey excitement into the Hollywood market. Well, not a tidal wave, but enough drops in the proverbial bucket to  warrant Disney picking up a sidelined script about a disgraced lawyer being forced to coach a ragtag group of multi-racial street rats.

The motley crew of poor-to-lower-middle class punk kids includes a young Jussie Smollett who proudly chants the team’s new mantra: “Take the fall, act hurt, get indignant,” which may explain how the events of his later career transpired…

The first Mighty Ducks film, despite being viewed and thoroughly enjoyed as a classic of childhood cinema by perhaps every Millennial in the country, has earned a shockingly tragic score of 23% on Rotten Tomatoes.

At first, it makes you wonder who could have panned this film so mercilessly that it resulted in such a low score. Then you see reviews such as this gem from Janet Maslin of the failing New York Times:

“The film is remarkably oblivious to the fact that if the team weren’t hell-bent on a championship, young moviegoers would be significantly less interested in its adventures.”

Imagine this review being lobbed at any other film… Star Wars is remarkably oblivious to the fact that if the heroes weren’t hell-bent on defeating the Empire, young moviegoers would be significantly less interested in the adventure.

It becomes increasingly clear that these finger-wagging, anti-sports, Fun Police Critics have zero tolerance for any film that boasts the benefits of teamwork and athleticism without shoehorning in some message about transgender acceptance or how all of the white kids are racist until they figure out the magic of intersectionality.

No, The Mighty Ducks is a film where children of all races are playing hockey (of all sports) as a unit. Unsuccessfully, of course, at first, but nothing a reluctant alcoholic in a kids’ movie can’t fix! Unlike The Bad News Bears, the message of children of different ethnic backgrounds playing together is a non-issue. The District Five “Ducks” even have multiple girls on the team and it’s never even so much as mentioned.

This is what drives the critics nuts. There is only one major conflict or message in The Mighty Ducks outside of the journey to become the best junior hockey team: father figures. This is another theme that cuts into the progressive narrative that companies like Disney, for a time, seemed keen to thwart, but critics and journalists refused to support: Having a good father figure builds character.

This patriarchal theme is apparent in all three franchise films but really hits hard in the first and third. Let’s briefly play it out: 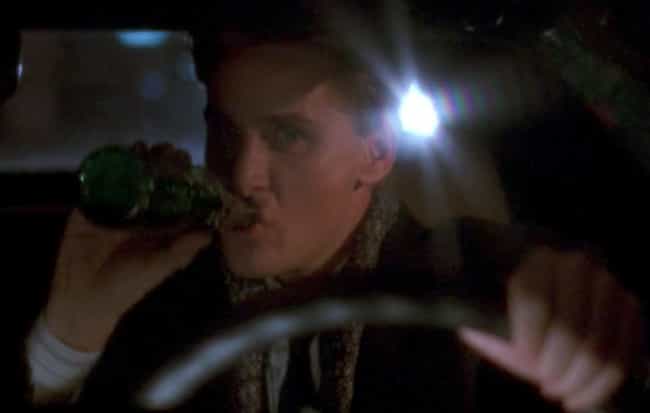 Gordon Bombay seemed like a sweet kid, passionate about hockey and impressing both his Father and his surrogate father, the Coach of the Hawks. His father passes away and his Coach becomes disillusioned by his failure. Gordon then turns to the supportive embrace of a local Minnesota sports gear shop owner named Hans.

When Bombay becomes a lawyer, his boss, Mr. Ducksworth replaces all other father figures. At first, Mr. Ducksworth seems to take Gordon under his wing (pun intended), but later abandons him almost arbitrarily over some favor he owed a client.

Gordon turns back to Hans for support, but now the tables have turned. The star player on Bombay’s new ragtag group of kids is a kind-hearted boy, passionate about hockey, who has…drumroll please…no dad. Feeling guilty and emotionally connected to Charlie Conway, Gordon ostensibly agrees to be Charlie’s Coach, Father, and Guardian. The film ends on a high note. All the poor kids have fatherly guidance in their lives and they’ve proven to themselves that they had the moderate talent it takes to win a junior hockey championship.

The 2nd and 3rd films in the franchise are less memorable, are often more goofy, and offer a bit less substance, but are still enjoyable nonetheless, and are far better than their abysmal 20% scores on Rotten Tomatoes.

In 1994, the Gordon Bombay returned in D2: The Mighty Ducks, where he makes a decent run at minor league hockey before getting injured. He was then offered a lucrative position as spokesperson for sports gear company Hendrix, as well as the opportunity to coach the sensational Mighty Ducks once again, but this time as Junior Goodwill Olympic Games Team USA.

The lesson in D2 is a convoluted one. The Ducks have gained plenty of nationwide fame somehow, even to the point that Anaheim, California has named a new team after them. Their fame continues as they dominate countries like Trinidad and Tobago (who I guess have a hockey team?). Pride starts to go to everyone’s head, especially with the addition of a new handful of players that appear to have been taken straight out of a Street Fighter game.

When it came time for the Ducks to go up against more reasonably competitive countries, Gordon Bombay fears that team, and he, will be humiliated. Bombay begins to push the team to practice hard, thus turning him into what is essentially a Disney Villain. The team loses their faith in Bombay as a coach and seeks affirmation in a band of inner-city black street hockey playing youths led by trash-talking Keenan Thompson.

Gordon apologizes for trying to coach them, Charlie Conway accepts that even though his “dad” works too hard, he still loves them very much. The team adds to their roster again, and Bombay, the old Ducks, the figure skater, the cowboy, the suave hispanic guy who can’t use his brakes, the girl-goalie, and the Bash Brothers defeat Iceland (the real bad guys) and save the day for competitive sports merchandising!

D2 suffers from the strange absence of central character Mrs. Conway and even more essential character, Gordon’s mentor Hans who is inexplicably replaced with a similar-looking character named Jan… It is easily the least-memorable installment in the trilogy. 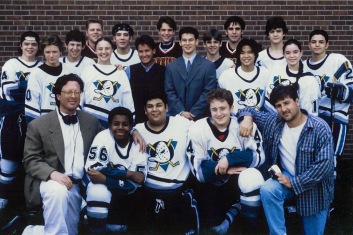 D3, released in 1996, completes the cycle and returns to form on the theme of role models, arrogance and the influence of male authority figures in the lives of young boys. Gordon Bombay pulls some strings and gets the entire Ducks team JV Hockey scholarships at his alma mater, Eden Hall. He wishes them well, and heads off on the road to work his new job with Hendrix Sports Gear.

This sends Charlie Conway into a downward spiral of abandonment issues, resulting in lashing out against the team’s new Eden Hall Academy coach who just seems like a normal guy who wants his team to do well. Charlie’s actions get him cut from the team and his constant tantrum-throwing disappoints Hans to death.

The gang re-unites for Hans’ funeral, where an emotionally broken Gordon Bombay explains to Charlie that he only left because he trusted that Charlie would take his place as leader of the team.

Charlie rejoins the Eden Hall JV Warriors which temporarily rename themselves the Eden Hall Ducks and win an ultimately meaningless scrimmage with the Varsity team. Having saved the team, and the team’s pending scholarship from imploding, a self-satisfied Gordon Bombay disappears into the crowd as if he never really existed at all.

Charlie Conway’s behavior in this final installment almost accidentally comes off as a hyper-realistic example of the effect paternal abandonment has on young men. He begins lashing out at everyone, including his friends and replacement mentors. He points the finger at everyone who doesn’t want to follow him on his crusade, accusing them of being treasonous and artificial.

If Disney ever comes back with a D4: The Mighty Ducks after all these years, I would expect the plot to feature Charlie Conway, a barely-scraping by 38 year old alcoholic, breaking into Gordon Bombay’s home to complain about how none of the Mighty Ducks want to get back together. All of his former team-mates are now coaches, retired NHL players, or career-driven mothers and fathers. All except Charlie.

Seeing that Charlie is in a desperate state and ultimately self-destructive, a middle-aged Gordon Bombay secretly does one last favor for his old friend: convinces the old Mighty Ducks to get back together and compete in a fictional tournament against some college hockey teams. 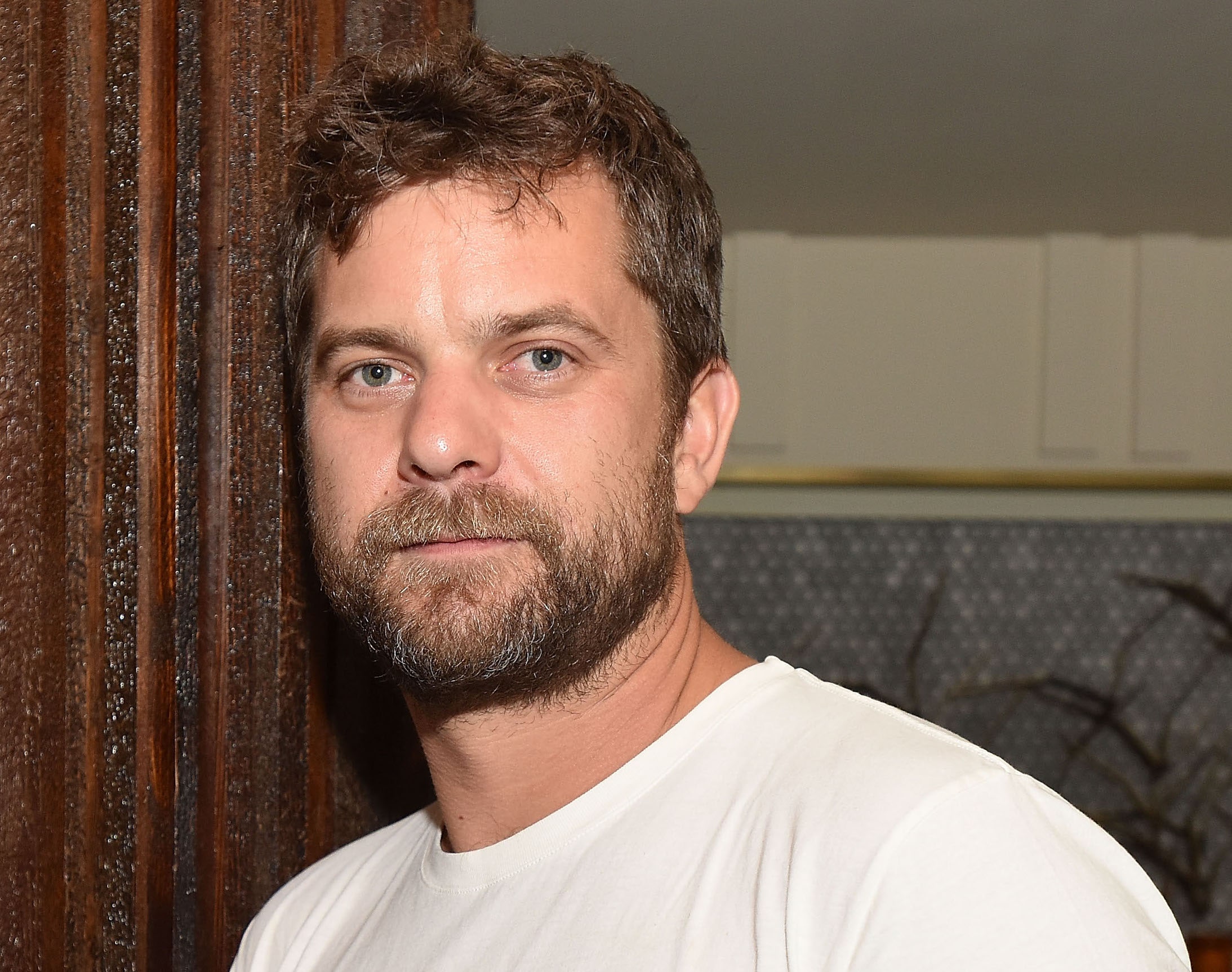 In the midst of realizing they are no longer good enough to compete against young college athletes, the Mighty Ducks accidentally let it slip that this was all a rues so that Charlie Conway wouldn’t drink himself to death. This revelation lights the spark in Charlie to get the team motivated and competitive, bringing back classic old moves like the Flying V, Knuckle Puck, Triple Deke, and Fulton Reed’s concussive slap shot. The Ducks win the tournament, but what really matters is that Charlie learns the lengths his old friends will go to just to make sure he doesn’t die.

Hopefully the clock hasn’t run out on making this film happen. I think the nostalgia value alone would more than make up for the crippling darkness of the plot.

And this is exactly why there will never be another kids’ film franchise like The Mighty Ducks. Something happened to our culture after September 11, 2001 that increased our desire for two things: looking back at a time before 9/11, and escaping completely from reality. Superhero movies and Fantasy flicks rule the day, and the only reprieve we get are shallow remakes and Muppet Movie-style cameos that give us a fleeting feeling that our childhoods are not entirely corrupted and lost.

I have more confidence that Disney will eventually reboot The Mighty Ducks, destroying the cast dynamic irreparably. The coach will be a trans female, and the ragtag group of inner city black hockey playing kids from Chicago will have to learn to take orders from a “girl” coach in order to improve to the point of winning the PeeWee Hockey Championship. But let’s face it, they were the best and most talented team all along anyway. Let Disney take the loss.