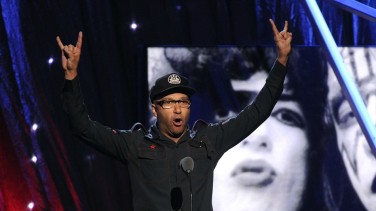 You may have already forgotten (good for you) that the “rap rock supergroup” Prophets of Rage formed last year featuring most of Rage Against the Machine/AudioSlave, two members of Public Enemy, and B-Real of Cypress Hill.

The amalgamation of middle-aged artists who have never written a good song in their 30+ years in the industry (with the possible exception of Chuck D) were described by Tom Morello of Rage Against the Machine as “…an elite task force of revolutionary musicians determined to confront the mountain of election year bullshit, and confront it head on…”

Leave it to Communist “artists” in Che Guevara shirts to tell you whose opinions deserve to be violently “silenced” in this video for the incomprehensible Radical Eyes.

Last January, when Prophets of Rage came onto the scene, people were excited for a refreshing hardcore take on the “system” and the “racist evil” of the man running for President–a man who couldn’t possibly win.

Predictably, the project’s excitement and virility went flaccid, and a major album release from Prophets of Rage in September 2017 falls on deaf ears. But that won’t stop Tom Morello and Chuck D trying to sound cool on the failing Daily Show while they stumble through tired political rhetoric and drag their feet through another version of the same song they’ve been making for three decades.

None of this stopped me from checking out the album out of morbid curiosity. Let’s call it…my version of “cutting.” I’m always anxious to test my tolerance for pain. To get the full effect, you’d have to force yourself to listen to these individual tracks (don’t). But let’s establish that they all sound the same, and they’re all faux-edgy with goofy outdated record scratches. Now let’s get into the best part: the cringe lyrics.

It’s actually amazing that the album starts out like this. It’s the most apt introduction to what the rest of the album is going to be. The lyrics make no artistic or literal sense, and it’s clear that whoever is writing the words is deeply struggling for loose rhymes that sound like they may be intentionally deep. They’re not. But what else is new for Rage Against the Machine, Public Enemy, or Cypress Hill?

There are so many good lines in this track, but the desperate attempt for the chorus to become a chant reminiscent of Green Day‘s “No Trump, No KKK, No Fascist USA” is palpable. This is Black Eyed Peas level cringe.

Yo, where those candles lit / Teenagers blown to bits / I’m filling radio with hits / Prime nights at the Ritz

I’ll be honest, it was refreshing to find out this song wasn’t about illegal immigration. But it was distressing when I couldn’t fathom what else it could possibly be about. I don’t know. You tell me. Weed, maybe?

OK–finally we get a song with a defined purpose. The 110 is a California highway with lots of tent cities. Got it. Tom Morello said that everyone is rich and the tent city people are the ones suffering. Because Tom Morello lives in a world of grandstanding black & white. Sorry, Tom. You’re the elite. You’re sucking Trevor Noah’s cock while LA’s Democratic gov’t does nothing for homelessness. You do have democracy, Tom. But you depend on hypocrisy. Oh, shit. I should be Chuck D.

Um…let’s call this one an “intermission”? Oof…

TRACK 6: Hail to the Chief

It’s becoming more and more clear that this album was either written in 2003 and released today, or that it was written and recorded last weekend. Title makes it sound like it would be the album’s big ANTI-TRUMP song…but I’m not even sure what this is. Lots of cowboy references. I honestly don’t get it; nor do I see why anyone else would.

So far, that’s two songs in a row with titles that other artists performed much more competently. This one…this one was a doozy. I have to believe this is the last song they wrote. Tom Morello said “We need 12 tracks! We have 11!” to which Chuck D replied, “So what, man? I’m tired of writin’.” To which Cypress Hill responded, “What about just yelling DRONEZ?” And the rest is history. Seriously, though. This track is a fucking embarrassment to rap, rock, and rap-rock.

Standing on a rock / Staring at the cop / With the [?] / While you wanna hit the fucking blunt / We don’t want no pipeline / Injustice of a lifetime / Brothers turn away / Like they don’t see us spend a lifeline / High crimes / Does it make you wonder? / Stand together / Because there’s strength in numbers

Even the hardcore dedicated fans who scribe and dissect these awful lyrics have given up trying to figure this shit out. This is a mishmash of references to Left Wing causes randomly assorted with zero context. “Standing on a rock”? May be a throwaway allusion to the Standing Rock protest? Who’s to say? There has to be someone literate in this “super-group.” Right?

Everyone in this “super group” has Down Syndrome. They should’ve called it Prophets of the Syndrome and gave all the proceeds to some kind of charity that takes WEED away from these water-heads.

I think this song is about immigrants crossing the borders, having sex with American women, burning the American flag, and then whining about how they own the streets and matter to the country. I disagree.

I truly hope you’re starting to sense a theme here, and I think if you’re playing along at home, you too could write a Prophets of Rage song (or really any Rage Against the Machine song).
Pick a phrase that’s mildly provocative, but only enough to rile up a 13 year old. Repeat phrase with some familiar power-guitar riffs and some archaic record scratches that make you sound even more out-of-it than you ever could have done verbally. Done.

Well it was a long road, but we finally made it. Last track of the album. The only possibly respectful thing I could say about this album is that it clearly would have been exactly the same no matter who won the election; but that has very sinister undertones. Because while their political ideology isn’t swayed by Hillary Clinton or Donald Trump, they aren’t swayed by reality at all.

It’s all just a ledger of causes their retarded fan-base can feel politically stimulated over. Does anyone believe that these wealthy hall-of-famers give a shit about “the downtrodden”? Are we supposed to believe that these has-been performers whose aging fans only respond to out of nostalgia have any real clue about the nature of the world outside of violent rhetoric and communist iconography?

If you liked this album, you may want to have your chromosomes checked.

My review: Zero out of Ten Hot Dogs. Fuck it.