I’d like to say that violent protests and hyperbolic political discourse in the streets throughout our country was a new phenomenon; that our “Cheeto Dictator” President–or whatever–has inspired some insane reactionary hate movement.

Fortunately, despite what your illiterate Facebook friends may think, that’s not the case. But unfortunately, this kind of assault on western values, common sense and better judgement has been going on for quite some time. It’s been happening on college campuses, it’s taken over cities, shut down public spaces, and whether it’s White Supremacy, Radical Islamism, Faux-Marxist Revolutionaries, or a good ol’ fashioned Book Burning…fascism will gain ground where humanist and classical liberal values cease to exist.

So, in the spirit of Jeff Foxworthy (blessings and peace be upon him), here’s a short list of signs you just might be a real-life-honest-to-goodness Fascist.

Starting with the most important…

1. If you control the academic space enough to alter the definition of Fascism so it can’t possibly include you…you MIGHT be a Fascist.

Sites like Google have long controlled broad and mainstream access to information. We exist in a world where any question one could possibly ask is met with a ubiquitous, “Google it.”

Google has enveloped the educational space by pairing up with left-wing sites like Politifact and Snopes with the goal of providing users with faster access to their questions about news & politics. Seems reasonable enough, until you see the sinister side.

Originally when you Googled a definition for “Fascism,” you’d find this Dictionary.com result: 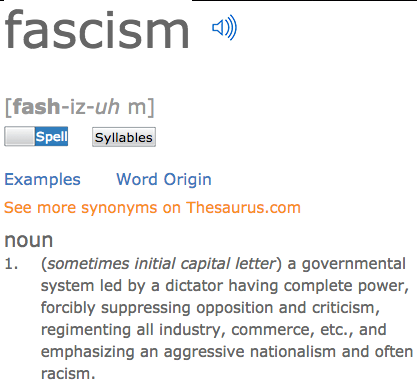 Pretty broad strokes, right? Flexible to include all suppressors of freedom? Well, in March 2016, seeing a rise in Populism against the Democratic agenda, Google decided to write their own definition:

After backlash against the company, they have since scrapped this definition and simply re-directed to Wikipedia.org which illustrates a more broad and historic context, despite flaws in its model.

Controlling the means to information is just as dangerous and controlling the information itself. You can re-write history to inflate and excuse any type of behavior. You can generate and dictate the language and use of words so that anyone falls into a category of oppression and dehumanization.

Imagine we passed a rule where American Nazis were no longer granted voting rights. If you identified as a member of a Nazi or White Supremacist group, you could no longer take part in American elections; and many would, perhaps cautiously at first, support this lunacy.

For a time, the 5,000 or so individuals who identify as White Supremacists would be alone in the removal of their Constitutional Rights. But then, who determines what classifies as “nazi”? Google? A politician? The foaming-at-the-mouth communist mob? Currently everyone from the President of the United States to Conservative TV pundits and academics are referred to as “nazis.”

SO…if your ‘team’ needs to control the narrative of science, history, and language in order to paint your opposition as an existential threat, you just may be a fascist.

2. If you create a movement for disenfranchised voters, then turn around and make it a race-centered authoritarian socialist ethno-state party…you may be a Fascist.

The dynamic of the Alt-Right has consistently been a confusing one. No one knows precisely how to define them, which is important to note because it implies divergency amongst their numbers. Mainstream media has made some attempts in the past to outline the dozen-or-so ideologies that make up members of the supposed “Alt-Right.”

Most of the time, media just gives up and uses buzzwords like “nazi group” and “white supremacists.” It’s easier that way, and nobody has to do any actual homework.

Last year, when everyone was trying to figure out what the Alt-Right really were they were free to kind of be whatever they wanted to be. They could be trolls, Internet hooligans, shit-posters, anti-SJWs, supporters of Donald Trump, and yes, even literal racists. 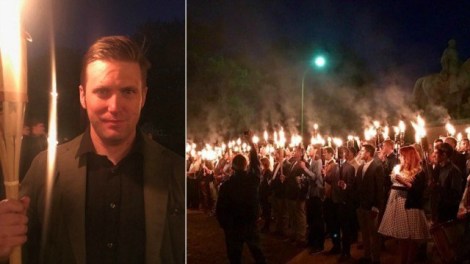 As it became clearer what the leaders of the movement, or at least the power-players, were really all about, the fracturing began, though the central belief in white nationalism socialism wasn’t essential to be part of the movement.

The media didn’t have to speculate. The Alt-Right became very open with their beliefs to anyone who willing to listen. The inconvenient truth was that their beliefs weren’t based on hate, but simply and authoritarian nationalism based on racial identity; and that was too much for the more libertarian conservatives to handle. And even though specific beliefs about race mixing were not required, it became the main focus of the organization.

However, the Alt-Right aren’t alone in their embrace of identity politics and victimization to shoehorn their radical ideology. There is also a growing force that believes strongly that a single party needs to rule consistently. This totalitarian ideology brings about the notion that only liberal progressive values must prevail at the expense of individual rights, free markets, culture and democracy.

Those who fight on behalf of this form of fascism are especially prone to violence, as we’ve seen all over the world. But we’ll get there next.

But let’s leave it at this: when you Trojan Horse identity politics and authoritarian national socialism into a movement people had convinced themselves was based on unique American Values, you might be a fascist.

3. When political violence exists in your tool-belt for silencing ideas your side finds offensive or ideologically harmful…you may be a Fascist.

It’s long been common knowledge that fascism’s first course of action is removing a population’s ability to defend themselves. For some, that means the right to bear arms, for others it means the right to have safe spaces where objectionable language is not permitted. Let’s put aside firearms and private “safe” spaces for a moment and focus on a more direct and visceral human value: speech.

We’ve touched on the academic aspects of redefining terms, but there are other core authoritarian issues that fly under the radar as well; revisionist history, erasure of cultural and historical elements that tie individuals to an identity, ethnicity or period of time. Toppling statues, destroying memorials, and creating a general fear for one’s safety or livelihood should they be guilty of the wrong ideas are all aspects of a Fascist authoritarian system, most closely tied to either Radical Islam or the supposedly Anti-Fascist Left.

Lately, Islam and Antifa have been becoming closer bedfellows in both support and behavior. The populous has been gaslighted by special interest groups, self-proclaimed social justice advocates, and even western politicians to believe that they must support radical fascist ideologies in the spirit of protecting the “little guy,” never stopping to wonder if this authoritarian cultural mindset is an ideal match for a nation that values free speech and diversity of thought.

But neither group supports either of these western social values, so they get along swimmingly. It will certainly be a shame when Islamo-fascism comes to impede the values of the Left, while they proceed to self-censor, de-platform themselves, support killers, and wrap each other in prohibitive clothing…it will certainly call to mind other cultures who welcomed fascist occupation with open arms.

If you’re using violence and threats of violent destruction as a means of keeping individuals from working, living comfortably, or sharing their ideas peacefully; when part of your belief system is that speech and ideas of any kind are tantamount to violence…you are a fascist.

That’s it for today, folks! See ya next time!